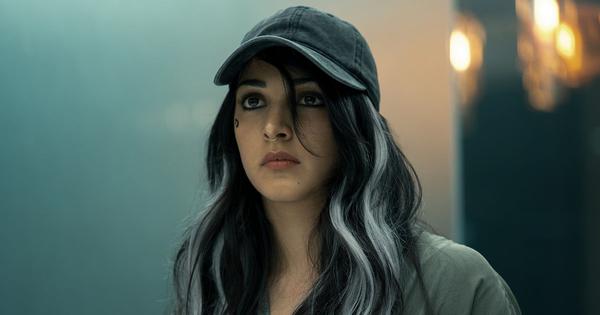 This ‘tribe’ is too cool for school, more focussed on music band practice and throwing shade to the new student at St Martin’s College. Nanki (Kiara Advani), the lyricist, is a rebel without a cause. She’s dating the lead singer and college heartthrob VJ Pratap (Gurfateh Singh Pirzada). Hardy, KP and Tashi make up the rest of the band.

Inseparable, fiercely loyal and high on attitude, the group’s cool quotient gets shattered when Tanu (Akansha Ranjan Kapoor), the crass and flirtatious new student who threw herself at VJ on Valentine’s Day, accuses him of rape.

Ruchi Narain’s Hindi-English language film, co-written with Kanika Dhillon, opens with each band member being interrogated about the fateful night. It takes a while to realise that Danish (Taher Shabbir) is not a police investigator but the solicitor hired by VJ’s family. However, the entire case seems to hinge on Nanki’s narrative. Did VJ do it? And Danish, rather creepily, is solely focussed on Nanki, so much so that the case begins to affect her dramatically.

Guilty is a reaction to the rise and stalling of the MeToo movement. It addresses issues of exploitation, power, gender dynamics, sexism, the class divide, prejudice, judgment and, of course, guilt. The writers (dialogue by Atika Chouhan) fastidiously check social media and hashtag vocabulary surrounding MeToo. As the law firm partner walks his client out of the door, he says, “I am on the verge of firing all my female interns.”

That’s the kind of casual reaction that followed when case after case tumbled out of the closet. The students are also divided in their opinion, swayed by the media and their peer group.

The 119-minute drama works as a commentary, but a combination of an arrhythmic ensemble cast, underdeveloped story arcs and characters (such as Nanki’s own experiences), and spotty editing, scuppers the whodunit factor. A dark colour palette and night shots are overused to establish the mood, and the trauma of sexual abuse and patriarchal patterns is only slightly addressed.

The emotional thrust comes from Kiara Advani as the troubled teen, who is constrained by conditioning, distorted morality and contrition. She lifts the film when the verbose climax begins to acquiesce to the pull of evangelism. Instead of starting a conversation, Guilty ends up talking at us. Fortunately what is being said is worth listening to.

Kiara Advani on staying grounded: ‘I want to make sure I am still the person I was before all this’